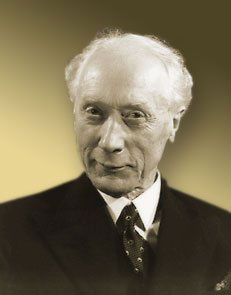 The Alexander Technique was developed by an Australian, Frederick Matthias Alexander, who was born in Tasmania in 1869. While following a successful career as an actor, reciter and elocution teacher in Melbourne (and briefly in Auckland), he began to suffer from recurrent hoarseness and breathing difficulties which threatened an early end to his work. When available medical help proved to be of little benefit, he set out on a remarkable journey of self-observation and discovery.

Over a period of almost a decade he developed the principles and practice now known as the Alexander Technique. An account of this journey of discovery is published in his book The Use of the Self, described in the British Medical Journal as a classic of scientific observation.

Using his approach Alexander was able to let go of his habits of tension so that his voice and breathing problems gradually disappeared. His work soon attracted increasing attention from other actors and public speakers, but later also attracted people with a variety of health problems brought about or aggravated by the way they "used themselves". The news of his success spread, and increasingly doctors and other professionals began to refer people to him. 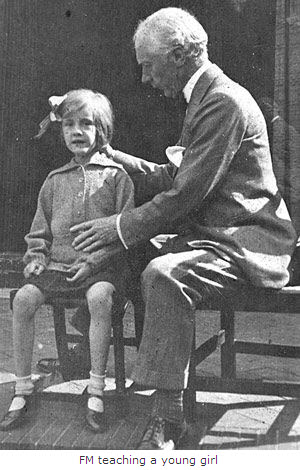 At first Alexander worked via verbal interaction, but in time discovered that gentle guidance with his hands could assist others to learn more quickly and easily.

In 1904, after some years in Sydney, Alexander moved to London. He established a thriving practice and his work attracted the attention of many well known physicians, academics and celebrities. They included the English actors Sir Henry Irving, Viola Tree, and Oscar Asche, writers Aldous Huxley and George Bernard Shaw, Lady Clementine Churchill, Israeli Prime Minister David Ben-Gurion, Archbishop of Canterbury William Temple, the Viceroy of India, the Earl of Lytton, and the American educator and philosopher John Dewey.

The popularity of his work spread and in 1931 he started the first three year training course for teachers of his Technique. Today there are Alexander Technique teachers and  training courses in many countries throughout the world. Alexander continued teaching the technique daily until one week before his death in 1955, his 87th year.

It takes time for a new idea and a new solution to gain respect, and become well known and well established in society. Awareness of and respect for the Alexander Technique have primarily grown through word of mouth as increasing numbers of people have experienced the benefits of the Technique. The Technique has become increasingly well known worldwide over the last 60 years, marked by many events including the following:

The Alexander Technique first became well-established in the United Kingdom. Nowadays, doctors routinely refer their patients to Alexander Technique teachers, and it is provided for within the National Health Service. Study of the Alexander Technique is included in the curriculum of many international drama academies and conservatoriums of music. It is a popular complement to sports and physical disciplines, with books published on applying the Technique to activities such as running, swimming, skiing, horse-riding and tennis.

More people are discovering the benefits of the Alexander Technique for alleviating pain and discomfort, maintaining health, and promoting a high level of physical performance.