Golf and the Alexander Technique

As Arnold Palmer once put it, "Golf is deceptively simple and endlessly complicated. It satisfies the soul and frustrates the intellect. It is at the same time rewarding and maddening - it is without a doubt the greatest game that mankind has ever invented." 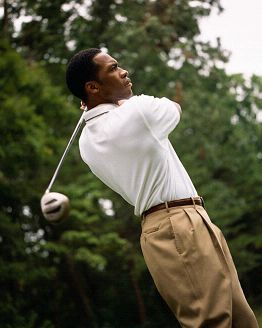 Golf has traditionally been seen as a physical exercise, however in recent years the sport has become better understood for its mental/emotional aspects.

Golf is indeed the ideal stimulus for emotional anguish. For instance, on any stroke, I can think more about the ways I could muck up the shot rather than how I might succeed at it. But this very thinking creates a kind of bunker all of its own; it makes me tense when I need most to be relaxed.

The means to the end

FM Alexander talked about the habit of "end-gaining" in relation to the way humans misuse their bodies. End-gaining means not paying attention to how we are doing something because we are fixated with the end result we want to achieve. There are many elements of golf which cause players to end-gain. Here are two examples.

An awareness of the slowness of players ahead of us, can create an anxiousness about delaying players behind us, and this thought alone leads to end-gaining. So as a result of our anxiousness, we rush our shots – as if by doing so we can somehow speed the game along. This is unconscious behaviour. The few seconds we save by rushing does not diminish the delay we cause the players waiting behind. And a rushed shot will also usually be a poor one. Yet we do it anyway. This is habit.

Trying to hit the ball too hard and looking up too quickly are the most common mistakes in golf. These two mistakes go together since they come from the psychophysical flaw: over-eagerness. It is generally true that the easier you swing the club, the further the ball will go, as well as the fact that you will have plenty of time to see the ball once you hit it. Despite these truths, it doesn't feel that way when you're an "eager-beaver". What feels natural is to look up and see where the ball is going as soon as you can. This is habit.

As human beings it is natural to want to hit a golf ball as hard as we can and to look up while doing so. We have made a voluntary habit of it, however we can learn to grow out of these habits and that is our magnificence as human beings.

On a physical level, the working of any of the parts of our body, affects the whole. So for instance, some golfers will have back trouble. The extra effort exerted in order to swing simply exaggerates the unhealthy habit we have developed. Excessive tension in the muscles of the neck and subsequent relationship of the head to the front and back of the torso will interfere with the co-ordination and balance of the entire body. In short, the trained Alexander Technique teacher will help you bring about a better balance of tension in your entire neuromuscular system, from head to toe. From tightness to freedom; from effort to smoothness. We have a great capacity for change and transformation as human beings.

We have the freedom to do the new, the different, but it requires a switch of thinking and conscious effort in order to change a habit.

In order to move the body we must first have a thought and it is the quality of our thoughts which create the quality of our movements. The very nature of the Alexander Technique as a psychophysical re-education means that it fits extremely well with the game of golf. The emptying of old patterns of thought and behaviour so that new ones can be adopted, is at the heart of the Alexander Technique.

As previously mentioned, an excess of striving is often a serious problem for golfers. One of the principles of FM Alexander's work was the discovery of the vital importance of "inhibition" in changing unconscious habits. This choice, to pause rather than reacting habitually, is a skill that is greatly improved by practice. Mostly, our reaction to a stimulus to move is completely automatic and so the Alexander Technique teaches us to create space between a stimulus and our reaction.

FM Alexander wrote in his book "The Use of Self", that we try to hit the ball rather than just let the ball happen to be there, that is, forgetting about the ball and playing our swing. This concept works along with the philosophy of "discipline and freedom" and "control and surrender".

Sports people can end up injuring themselves through the desire to improve their fitness. By learning to give more attention to the "how" of playing sport and an increased understanding of how best your body works, you will help to protect yourself from injuries.

How can the Alexander Technique improve your golfing ability?

This close relationship between how you think and how you move means that through the help of your teacher, you can teach yourself to be appropriately responsive moment by moment.

The experienced eyes and hands of an Alexander Technique teacher can help you to become aware of the way you carry yourself, move and hold tension. This information can then help you address the underlying cause of many health problems. Because our sensory experiences are so familiar to us and feel right, the Alexander Technique teacher can help you to explore ways you can change. This will then enable you to free old habit patterns which interfere with your ease and enjoyment of the game.